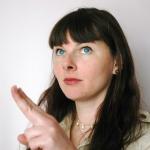 In 2011, Rachel founded Upwell. Over the 3.5 years of Upwell's existence, she went on to become the Executive Director of this nonprofit PR firm. Upwell's clients were movements. The ocean was our first client. Rachel led the development and evolution of Upwell's innovative big listening practices, coupling this big data approach with the resiliency-increasing tactic of campaigning across a distributed network. The project worked on a daily basis to both massively aggregate power for movements, and immediately redistribute that power through networks. Upwell's work was grounded in both offline community organizing and online community management. We developed and tested models to measurably increase online attention to issues. In the Spring of 2014, Upwell began a test to track issues in our U.S. democracy, and undertook research to baseline the African elephant conversation. Upwell concluded operations in March 2015.