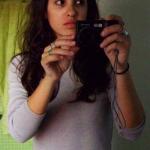 Born in Tel Aviv in 1981, Lior Elefant is a filmmaker and a video editor. Lior has worked for B'Tselem, one of Israel's most prominent human rights organizations, since 2010. At B'Tselem, she directs and edits short films and activates a special women program as part of B’Tselem’s camera project.

In addition to her human rights work, Lior is a film festival director and a teacher of film editing.

Documentaries edited by Lior have been screened around the world in festivals such as Cinema du Reel, the International Film Festival in Rotterdam, the Gothenburg Film Festival, and more.