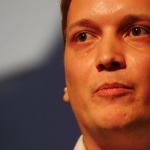 Ivan Marovic is an organizer and social innovator from Belgrade, Serbia.  He was a student organizer and one of the leaders of Otpor, the student resistance movement that played a critical role in the downfall of Slobodan Milosevic in 2000. As one of the most public of the organizations members, speaking often at rallies and marches, Marovic became Otpor's representative in the Democratic Opposition of Serbia (DOS) coalition where he took part in planning and preparations for elections and protests that occurred after Milosevic attempted to falsify ballots. After the successful democratic transition in Serbia, Marovic began consulting with various prodemocracy groups worldwide and became one of the leading trainers in the field of strategic nonviolent action. Between 2004 and 2010 Marovic worked at York Zimmerman, Inc. on video games A Force More Powerful and People Power that teach activists how to use nonviolent action in their struggle for social change. In 2011 he was hired by Vibe Network to develop Moba, a web based platform for local organizing around communal problems. Marovic holds a BSc in process engineering from Belgrade University and an MA in international relations from the Fletcher School of Law and Diplomacy, Tufts University. He currently lives in Belgrade with his wife and son.