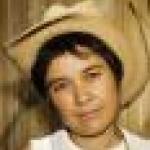 Emma Ari Beltran is a poet from Mexico. Since 1994, she has been involved in the struggle of indigenous peoples facilitating poetry and popular theatre workshops for women and children throughout Mexico. Beltran was a founding member of the first community radio station in Mexico’s history during the student strike at the National Autonomous University of Mexico in 1999. This work caused her to be subject to political charges, kidnapping and torture, by the Mexican National Army (March 2001). Exiled in Canada since May 2002, Beltran was an award-winning artist selected for Artscape’s Gibraltar Point International Artist Residency Program in 2005. Her poetry has been published in various literary journals and anthologies. She is a member of PEN Canada’s Writers in Exile Network and was a Writer in Residence at the University of Windsor during the spring of 2006. That same year Beltran participated at the Wired Writing Studio at The Banff Centre for the Arts, for which she was granted a full-scholarship. Recently she finished her work as a Lead-Writer for the TAXI-Project, a collective play about home and exile written in collaboration with Martha Kumsa, Sheng Xue and Goran Simic, and produce by PEN Canada and ARCfest.