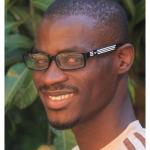 The 26-year-old promising and hardworking man, Charles Degold Gomez, born and raised in Serrekunda and a graduate of Saint Francis Senior Secondary School in 2009, is a partial visually impaired man who is so courageous to uplift the status of the visually impaired people. He always imagined how life will be if he was fully blind, what will happen to his future and how the society will see him, these are questions that keep buzzing in his head.

“When I became partial visually impaired, little did I know that, being blind does not stop me from becoming who I would like to be, neither does it stop me from hunting my career. I could recall the joy that fills my heart each time I tried to think about my past”, he said.

As a partially-sighted man, and due to the prejudice and challenges he faces, he said that he does face discrimination from people. He continued: “I have heard abusive words, but as a person with low vision, I was taught to see life as a challenge to be faced, and fight for my independence. This means to be persistence in what is important to me; equality and non-discrimination.”

Explaining that he fought tooth and nail to finish his senior secondary school education, he revealed that upon completing he wanted to be a journalist, but his eyes were an impediment, and he decided then to plump for youth activism, as a volunteer.

In 2014, he was awarded a scholarship by Braille without Borders (BWB) in Germany to study in kanthari (India) for seven months leadership training on social entrepreneurship after a recommendation from Start Now Organisation.

Disclosing that his role model is Sabriye Tenberken, a blind woman who is a social worker and a Nobel peace laureate from Germany, he called on society to do away with misconceptions of visually-impaired bringing bad luck to people, especially after early morning encounters, saying that everyone should appreciate and love the visually impaired people as they love their able bodied brothers and sisters.