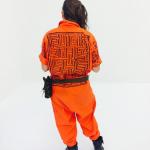 Based in Detroit, Ann Lewis, otherwise known as the street artist gilf!, is one of the nation's most recognized conceptual activist artists. She creates public and gallery work that evoke thoughtfulness, while simultaneously motivating progressive change within communities. In early 2014 the artist garnered national media attention when she installed an oversized police tape banner that read ‘GENTRIFICATION IN PROGRESS’  at the former graffiti mecca 5 Pointz in Queens, New York. In the fall of 2015 she was asked by the Obama administration to exhibit her work at the White House to discuss equality and mass incarceration. Recently she was invited to participate in the 2017 Venice Biennale. Since receiving her bachelor’s degree in Fine Art from the University of Wisconsin Madison, her work has been reviewed in Blouin Art Info, Hyperallergic, New York Magazine, Brooklyn Street Art, The Guardian, and The New York Times. She has exhibited in solo and group shows throughout the US and abroad including shows at Petzel Gallery in New York, Seyhoun Gallery in Tehran, Iran, and Known Gallery in Los Angeles. While her practice was born out of the street art movement of the early 2000s her work has has always been rooted in protest and has evolved to encompass participatory performances, murals, uncommissioned street work, gallery installations, and curatorial projects. She uses art as a means to continue her dialog of mindful and constructive global evolution and protest.