Summary Available
As more people throughout the world are forced to leave their homes due to conflict, climate change, or in search of a better life, host nations are trying to keep up with the influx of new students in their education systems. With scarce resources and limited funds, governments and organizations are forced to come up with new ways of including refugee students in local schools. With increasing xenophobia and gaps in integration policies, integrating these new students is not without its barriers. Language restrictions, finances, and lack of job opportunities are just a few of the obstacle keeping kids out of school. Furthermore, displacement and resettlement can leave children out of school for years at a time, making it difficult for them to rejoin formal education. Conversation participants discuss the issues with refugee inclusion in national education systems and draw on real-world programs as potential solutions to some of the challenges that refugees face in obtaining an education.

Summary Available
LGBTQI rights are fought for with a spectrum of tactics. In some states, gay citizens and allies march in pride parades and mark themselves with rainbows; in others, activists work in secrecy to protect their safety. Homophobia takes many forms and stems from a multitude of sources, each one different from the next. LGBTQI rights are human rights and must be upheld accordingly, but this lack of uniformity leads to distinct challenges in advocating for these rights on a global scale. Today, activists around the world confront a multitude of bigotry as they fight for the universal protection of queer individuals. In this conversation, participants discussed challenges and strategies for promoting LGBTQI rights through local and international actions across a range of situations.

Summary Available
Reconciliation and peacebuilding rest upon knowing as complete a picture as possible of the nature, causes, and extent of gross violations of human rights that have been committed. Investing in the education of youth is important because it expands their worldview and challenge stereotypes. By successfully doing so, youth can actively participate in shaping lasting peace and contribute to justice and reconciliation in their respective societies. For example, Canada has integrated meaningful reconciliation into classrooms and workshops to help learn about its history of colonization and think creatively about the future. South Africa has also recognized the importance of educational reform in order to address the problem of reconciliation and conflict transformation in youth. The importance of empowering youth to engage and take an active role in non-violence, dialogue, and reconciliation was at the center of this conversation of the potential roles that youth can take in truth and reconciliation at both the local and global level.

Summary Available
Businesses and human rights are to a large extent interdependent: businesses are able to play a positive or negative role in building human rights movements, and the position that a business takes can influence its brand in the same way. In January 2017, Uber experienced a backlash on social media that called for users to delete the app in response to the company’s decision to turn off surge pricing and continue service to the airport during the New York City taxi drivers’ strike against President Trump’s executive order on immigration. Thousands of Twitter users adopted the #DeleteUber hashtag to decry Uber’s actions, and many consumers turned to Lyft for future service, which fiercely opposed the executive order and announced a one-million dollar donation to the American Civil Liberties Union. As demonstrated in this case, businesses can impact the human rights of their employees, customers, and communities. It is important to explore the innovative ways in which businesses can participate in human rights movement building. Conversation participants discussed the tactics and strategies used to integrate businesses, both locally and internationally, in human rights movements.

New Tactics offers a variety of workshops covering the Strategic Effectiveness Method. The value of the workshops is in gathering the members of your organization together to discuss and agree on the outcome of each step. Many minds and thoughts add value to the process, resulting in a campaign that is better and stronger.

Summary Available:
Protest art has been practiced throughout history, especially serving the anti-war movement in the mid-20th century. Today, art has become a powerful and international language to speak against all forms of human rights violations, along with other activism. For example, during the Arab Spring, the arts were used to make anti-authoritarian statements. The photographer and graphic designer, Nermine Hammam, captures the fundamental frailty of rule by force in the global community in her exhibition Cairo Year One by combining the realities of the conflict with a surreal and idealistic background. Tunisian folk-rock singer Emel Mathlouthi and rapper El General used music to rail against the state brutality and the suffering of Egypt’s youth and working class, which attracted considerable attention from protestors and transformed into a powerful protest song. The protest art of the Arab Spring has since joined a broader dialogue between protest art of the past and present, in mediums as diverse as books, film, performance art, and multimedia.

This book, published by the Center for Victims of Torture - New Tactics in Human Rights, is a collection of 80 stories of successful tactics used for human rights work.  The stories come from all over the world and range from prevention tactics to intervention tactics, restorative tactics to those that building human rights cultures and institutions.

Using the New Tactics Strategic Effectiveness Method, organizations in Tunisia were able to push public transportation executives to agree to make the most popular metro line in Tunis accessible for people with disabilities. 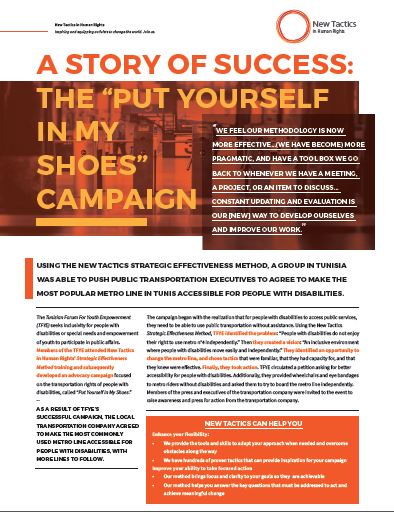 This brief article is featured in the book, New Tactics in Human Rights: A Resource for Practitioners (pages 12 - 18). It provides an excellent overview with strategic insights for human rights advocates for expanding their strategic and tactical thinking capacities in order to diversify, adapt, innovate and implement effective tactics.