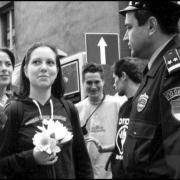 But Plan B – organizing secondary demonstrations outside police stations where demonstrators were being held – allowed people to overcome their fear of participation and keep activists involved, especially at a crucial point in the struggle. It also helped turn one of the regime’s strengths against it, thus switching the balance of power. People must be able to safely rise above the fear of speaking out if they are to participate, especially in an effort to overcome a repressive regime. Otpor!’s experience allows us to learn about one tactic used to help alleviate fear and empower people.

More ways to reach your tactical goal of protecting those at risk:

Using smartphones to advance safety and protection in public places
Women Making Peace: Mobilizing Ourselves Against the War
Taking on Our Own Defense: The Chiapas Network of Community Human Rights Defenders
Plan B: Using Secondary Protests to Undermine Repression
A Call to End Corruption: One Minute of Darkness for Constant Light
END_OF_DOCUMENT_TOKEN_TO_BE_REPLACED

Violence against Women: Advocating for Legal Reform
Tactics for Combating Militarisation
The Dilemma Demonstration: Using nonviolent civil disobedience to put the government between a rock and a hard place
Women Making Peace: Mobilizing Ourselves Against the War
Plan B: Using Secondary Protests to Undermine Repression
END_OF_DOCUMENT_TOKEN_TO_BE_REPLACED