Over the past two decades, Equipo Argentino de Antropologia Forense (the Argentine Forensic Anthropology Team, or EAAF) has identified the remains of victims of state violence. During Argentina’s military dictatorship (1976–1983), 10,000 to 30,000 people were killed or “disappeared” by the state. The EAAF’s goal is three-fold: to return victims’ remains to their families and thus aid in the healing process; to provide evidence for legal cases against the perpetrators of state violence; and to train and support the formation of other forensic teams in coun­tries that have suffered periods of violence and need to investigate the past.

In 2002, Poder Ciudadano (Citizen Power) collected signatures on a petition that, under a constitutional provi­sion, the Argentine congress was then obligated to consider. The constitutional provision requires the congress to deliberate any proposed legislation brought before it by community members or organizations, as long as that legislation bears the signatures of 1.5 percent of Argentine citizens in at least six of 24 districts.

Memoria Abierta has created a system to make accessible all public archives of documents, photographs and interviews that testify to the horrors of state terrorism in Argentina, its victims and the people who stood against it. While anyone with Internet access can search the online catalog of the files, the actual materials remain in the offices of each member organization or in Memoria Abierta’s office. The database provides a single index of all materials, easily searchable by any user.

In 1999, the Centro de Estudios Legales y Sociales (CELS) worked with a group of beneficiaries of a nutritional social program, the Garden Program, to successfully prevent its elimination. In order to pressure the Argentine government to reinstate the needed money to ensure the survival of the program CELS made a presentation to the World Bank Inspection Panel requesting that the undisbursed tranches of a Structural Adjustment loan be withheld until the problem was solved.

Workers in Argentina have tried to prevent job losses by refusing to stop working when their employers’ business­es go bankrupt. Jobs at nearly 200 fabricas recuperadas, or recuperated factories, have been saved by workers who use a little-known expropriation law to prevent removal of equipment by creditors and to seek receivership of the factories. The businesses range from ice cream factories and metal works to four-star hotels and shipyards.

Hijos por la Identidad y la Justicia contra el Olvido y el Silencio (Children for Identity and Justice Against Forget­fulness and Silence, or H.I.J.O.S) organizes targeted demonstrations in front of the homes of people who have been identified as perpetrators of human rights abuses. These demonstrations, called escraches (“unmaskings”), publicly expose the abusers and allow communities to express their moral condemnation.

Citizen Power Argentina promoted mass participation of citizenship in two popular initiatives that mobilized more than a million people to pressure the State into creating new legislation, in the first case against corrupt pension privileges in government and in the second case to promote a system of assistance in response to children affected by malnutrition and hunger. 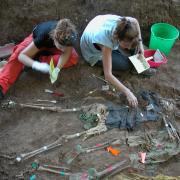 Forensic science has been a powerful tool in the scientific documentation of human rights violations around the world, and especially in Latin America. The Argentine Forensic Anthropology Team has been in the forefront of efforts to train human rights NGOs to use forensic tools to advance their investigations, to provide more support for victims and to strengthen the credibility of their work against impunity.

Documentary Heritage is a program of Memoria Abierta (Open Memory), whose goal is to improve the use of and access to the documentation stored in the institutional archives of participating human rights organizations.  The Documentary Heritage Program seeks to make all of the documentation related to the period of state terrorism and its present consequences accessible for research and educational purposes, thereby increasing knowledge and contributing to a social conscience about what occurred in Argentina.