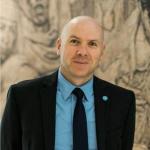 Dr. Simon Adams is President and CEO of the Center for Victims of Torture, the largest international organization that treats survivors and advocates for an end to torture worldwide. The Center for Victims of Torture is a nonprofit organization with offices in Ethiopia, Iraq, Jordan, Kenya, Uganda, United States and additional project sites in countries around the world.

Dr. Adams previously served as Executive Director of the Global Centre for the Responsibility to Protect for a decade, where he led advocacy at the United Nations and with various governments to help prevent crimes against humanity, war crimes and genocide. He has also worked extensively with human rights defenders around the world, including in Syria, Myanmar, Iraq, Democratic Republic of the Congo and other conflict zones. Between 1994 and 2002 Dr. Adams worked with former IRA prisoners in support of the Northern Ireland peace process. He is also a former member of the international anti-apartheid movement and of the African National Congress in South Africa.

Among his other commitments, Dr. Adams is currently Co-Chair of the International Advisory Board of Skateistan, an award-winning non-profit organization that uses skateboarding to introduce children to educational and leadership opportunities in Afghanistan, Cambodia, Jordan and South Africa. In 2020 a documentary about Skateistan, “Learning to Skateboard in a Warzone (If You’re A Girl),” won an Academy Award.