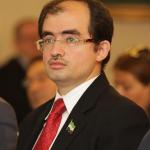 He is the Head of the Syrian Commission for Transitional Justice, which was established on November 14, 2013 by the Syrian Interim Government. the Commission tasked to work on the transitional justice file, including investigating crimes, considering means for prosecution, and building a national reconciliation program, among other items.

Ziadeh was a Visiting Scholar at Lehigh University, and Fellow at the Institute for Social Policy and Understanding (ISPU) in Washington D.C.

Since the Syrian uprising started in March 15, 2011 he was involved in documenting the ongoing human rights violations in Syria and testified at the UN Human Rights Council in Geneva twice. He was also involved in the Syrian political opposition. He was elected in October 2011 as director of the Foreign Relations Office of the Syrian National Council until he resigned from the position in November 2012.

Before that he was a Reagan–Fascell Fellow at the National Endowment for Democracy (NED) in Washington D,C and Visiting Scholar at the Center for the Study of Human Rights at Columbia University in New York City. He was also a Visiting Fellow at Chatham House (The Royal Institute of International Affairs) in London and a visiting scholar at Carr Center for Human Rights at Harvard University (2008–2009). In 2007–2008 he was a Senior Fellow at United States Institute of Peace (USIP) in Washington, D.C.